Map of Melbourne towards St Kilda Road and Southbank

Map of Melbourne and Olympic Parks complex including nearby Yarra Park

The renamed Flinders Park was converted from a collection of public playing fields to become the National Tennis Centre, with a charter to act as a public entertainment and recreation area featuring so-called multi-purpose venues.

Visitors are warned that our staff member was hit TWICE by Kia courtesy cars going through stop signs and otherwise ignoring safety rules while on the premises during the Australian Open.

The Melbourne Park and Olympic Park sites are believed to be haunted. A female ghost has been seen in the function centre, a man walks the eastern courts, and there are supposedly ghost dogs at Olympic Park which was once the site of a greyhound track. 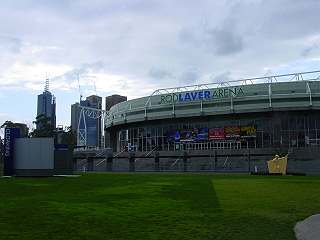 Hisense (previously Vodafone) Arena features a sliding roof over a velodrome (bicycle race track). Seats 4,000 as a velodrome, 10,000 when the fly-away seating sections are in place.

For a panorama which includes this park, click here.

Melbourne Park, 1 Batman Avenue, Melbourne.
Tram 70 from Flinders Street, or train to Jolimont Station and cross Yarra Park and footbridge, or train to Richmond Station and walk or tram towards the city along Swan St.