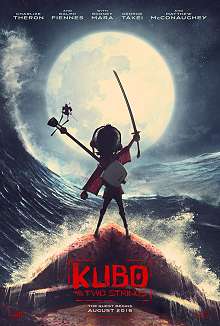 Movie poster, Kubo and the Two Strings
The quest begins

Kubo lives a humble life in a small shoreside village until he accidentally summons a spirit from his past which storms down from the heavens to enforce an age-old vendetta.

Kubo joins forces with Monkey (Charlize Theron) and Beetle (Matthew McConaughey), and sets out on a quest to save his family and solve the mystery of his fallen father, the greatest samurai warrior the world has ever known. With the help of his shamisen - a magical musical instrument - Kubo must battle gods and monsters to unlock the secret of his legacy, reunite his family and fulfill his destiny. (animated)

We will post a review here closer to the release date.

Scroll down to see the trailer

See more films to be released in July 2016