An American At War 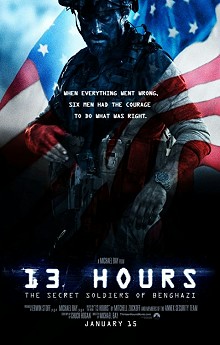 Movie poster, 13 Hours: The Secret Soldiers of Benghazi
When everything went wrong six men had the courage to do what was right

An American Ambassador is killed during an attack at a U.S. compound in Libya as a security team struggles to make sense out of the chaos.

We will post a review here closer to the release date.