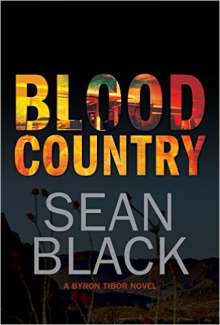 Call it the age we live in, but science fictional concepts are increasingly appearing in other genres. Blood Country features the return of Byron Tibor. Ex-special forces, his PTSD was treated by members of the 'guilt-free' program.

He is on the run from the U.S. government, the C.I.A., the state department, -- people who have 'kill teams' a phone call away.

For Byron, his is a life on the run, and more, a life seeking to discover what humanity has been left to him. Has a man engineered to kill on demand any cause to still call himself a man?

When Byron falls afoul of the Kelsen County justice system he finds that he is part of a brutal forced-labour camp. He must escape before who or what he is is revealed and the kill teams come for him.

Blood County is part of the adventure-thriller genre. It is made more interesting by Byron's struggle developing a conscience and moral code despite his programming. Author Sean Black also uses the relationship between the townspeople who benefit without a thought to the workers and the consumers of sweatshop made goods.

Easy to read and interesting.